Besides elephants, rhinos, hippos, buffaloes and various types of antelopes today in Kruger Park, we came across the perfect specimen of Afrikaner redneck, Arthur, pro big game hunting, anti arm-control and pro-Trump. I should have taken a picture of him. But, missing that I’m sending one of me with Tembo the elephant. It might look more like a tree trunk than an elephant, but I swear it’s an elephant, the photographer just had a warped sense of perspective.

I swear, it is a real elephant!

Tembo is a tame elephant. Intelligent and sensitive, with eyes to melt your heart, he is accustomed to stand patiently and put up with us, pesky tourists.

Of course, I could have pretended that I tamed him from the wild and coaxed him into such accommodating behavior, but I strongly suspect that nobody would have believed me. In fact, we visited an elephant camp where they rescue injured or orphaned animals. Tembo had an interesting history of escaping a reserve after fighting with a rogue elephant who had opened a breach into the fence. The rogue’s intention being to come after Tembo’s sister which the latter gallantly defended. Followed a series of misdeeds and more fights until he was brought into this camp where he retired from his misspent youth.
Anyhow, I wish the photographer had caught the whole elephant, rather than just a leg. It would have been more… credible.
This elephant camp had nothing to do with the one in Laos where I found myself a few years ago, the only visitor to ride the elephants in the mountain at night and pick them up at dawn, muddy and dusty, for a much needed early morning bath in the freezing river.

Talking about freezing, you can probably tell, from the way I’m dressed, that it’s not exactly warm here.
We arrived last night in the Machadodorp area, on the Highveld plateau at about 2,000 meter altitude. It looks somewhat like the English countryside, as if it had been photographed with a wide-angle lens, the same rolling hills, greenery and horses grazing, but expanded, stretched out to a very far away horizon. Except that in England, the same scenery would have been compressed, closed in.

We stayed in Kloppenheim, a sumptuous country estate. my huge room could have belonged to an English manor: fireplace, French doors opening to a terrace overlooking an endless panorama, heated bed, bathtub with boiling water:

And TV5 relating the latest shenanigans of Saudi Arabia: Have they kidnapped Harari or did he, as a supporter of Saudi Arabia, seek refuge in Riyad ?
But… no Internet!

You knew nothing about Swaziland?  Neither did I, let alone remember the name. I kept confusing it with Botswana.

A little over one million souls and a king and queen ruling team, except that they’re not husband and wife but mother and son. It’s always like that in this matriarchal society, you become king on virtue of being your mother’s son. The Queen is chosen and the son follows. 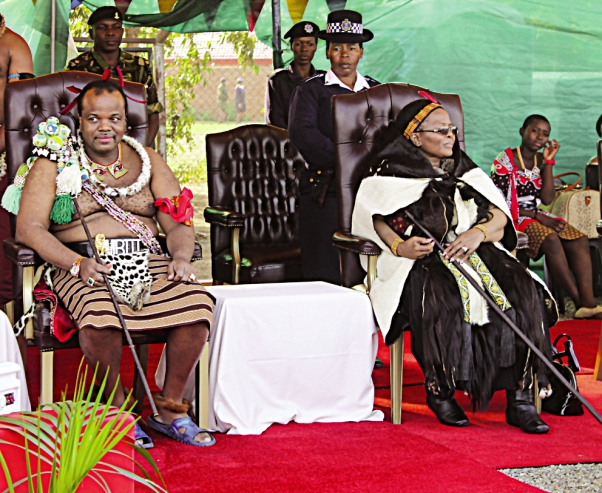 H.M. King Mswati and H.M. the Indlovukasi (literally the Great She-Elephant) of Swaziland

He doesn’t marry but takes concubines (13 at the recent count) and being the king’s son doesn’t give you a right to the throne. 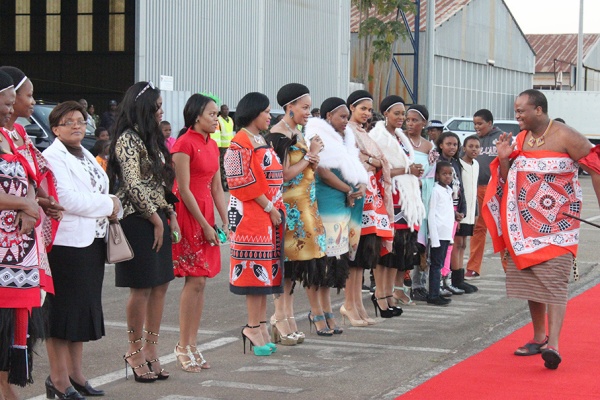 King Mswati the III and his wives

We met one of those strong women this afternoon, the Umphakatsi village chief. Quite a personality!

On the picture, I’m wearing a pareo at the very effigy of King Mswati III. You make sure not to put it on upside-down or inside-in, that would be disrespectful. And women shouldn’t wear pants in the village.

Not that it would offend men, because there aren’t any to be seen. Apparently, the stay in the shade, drinking and playing cards, women doing most of the hard work.

A long walk in the Milwane reserve this morning. A chance to get moving mostly, as the animals remain elusive to say the least: a few wildebeests far far away, a couple of zebras, a lonely warthog, several tame antelopes and many termite hills. It’s like being home: lantanas and termites! 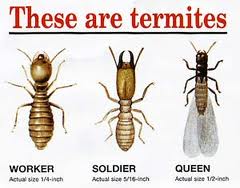 I discovered that the woody, granulous termite excrements that I sometime find in the least appropriate corners of my house ( as if there were appropriate places!) are essential to the savannas’ ecosystem. Without them as fertilizers, the herbivores would starve as well as those who feed on them. Termites’ social organization is similar to ants’, except perhaps that termites feed on fungi grown on what they collect. They might also be the inventors of the first air. conditioning system as they manage to keep the nest at a fairly stable temperature ranging between 27 and 31 C.

Well, I won’t bore you with termite talk as you can easily find the information on internet.

END_OF_DOCUMENT_TOKEN_TO_BE_REPLACED

Arrived in Durban at noon.

This trip so far has been a crazy race.  I don’t usually pick such hyper travel companions.

Truth is I’m mentally, if not physically, exhausted, have no time to write, let alone to think.

So I took the day off today!

Enough is enough!  “I vant to be alone”( Greta Garbo). 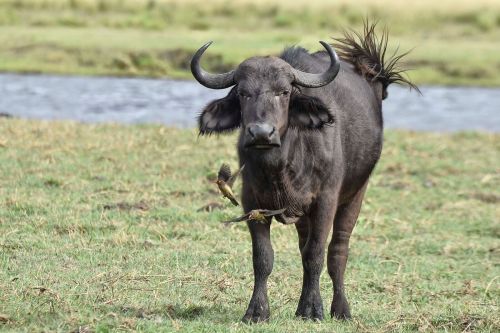 all that in a semi-coma. I declined the visit to the Zulu village (fake in my opinion) and a second safari in the afternoon.

Went back to my tent  after breakfast and slept until 11.

Being a pathetic photographer, it’s only because the animals were rather lethargic themselves that I managed to catch them in semi-action.

Today is pretty good though, the lodge is practically empty, I just had lunch in blessed aloneness.

I’m sitting on the wide veranda overlooking the savanna with its acacia trees and listening to the songs of weaver birds and sing-song Zulu talk of the personnel.  It almost sounds like very fast-spoken Italian.

My travel companions are no younger than I am, but they all seem to be on some sort of crazy mission, as if it were their last trip: they have to see everything, go everywhere non-stop, rush from one destination to another and comment everything . You’d believe they’ve never seen anything, perhaps have I seen too much… Let’s say that I prefer to see one thing and see it well.

I usually organize my own trips, rent a car and keep some time to loiter, do nothing, get lost, absorb, listen… This time we have some sort of a mini-van.

Well, live and learn.  Organizing a trip takes a lot of time and trouble but it’s worth it, you hold the rudder and sail your ship at your own rhythm.

Moment of grace this afternoon: As I was walking under the yet to be identified tree where the weavers have set up their GQ.  The little guys were busy fluttering in and out of their woven egg of a nest.

Sounds of the night: some huge croaking frog or toad; something like two bamboo sticks knocking against each other; the birds have gone to sleep.

It doesn’t take much to make me happy, to make my day.  The aloneness and little yellow birds. Walking fast on a red earth road, this morning, the endless savanna and nothing else ahead of me, except for the occasional baby antelope.

I don’t have the impression to be in Africa yet. Big western style cities;

Disneyesque hamlets restored to evoke their European or Malay origins but failing to be entirely convincing;

otters and penguins difficult to conciliate with one’s idea of Africa;

hordes of tourists everywhere and so many smiles and hellos from people who might have every reason not to smile. That makes you wonder how sincere they are. They look and sound sincere though.

This is all rather rushed and much too fast for my own contemplative rhythm. I need to be alone. I need silence. I’m not complaining, I’d just like to be able to hear myself think a little bit, decant what I see, assimilate it. It’s been difficult so far. I always remember Africa as I first saw it in 1975: the huge empty spaces;

scenery evoking prehistory as one imagines it, being practically alone in the Ngoro Ngoro crater; 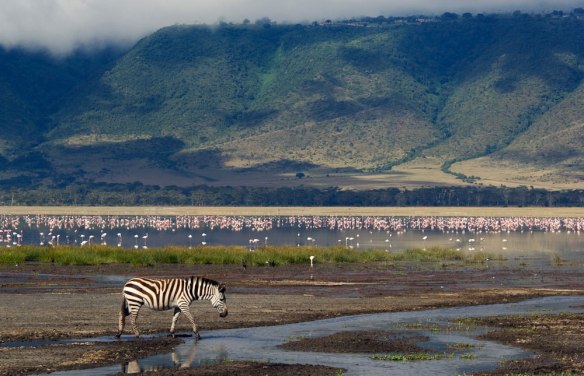 in the reserves, the noble Masai defiling spear in hand along the roads, their cattle in tow. 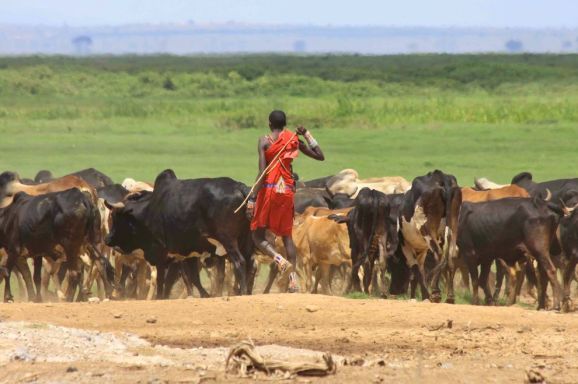 That was a time when you felt you had pieces of the world all to yourself. I think I’m a bit nostalgic…